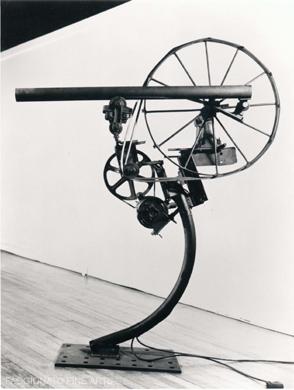 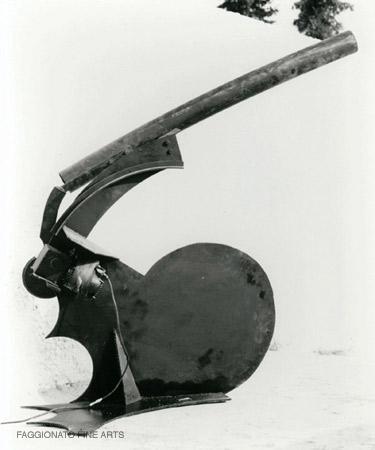 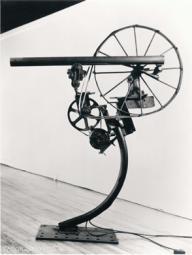 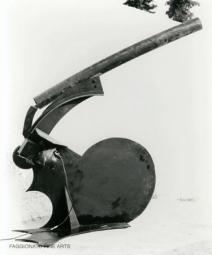 JEAN TINGUELY (1925 – 1991) Sixties Sculptures 4 December 1998 – 27 February 1998 Faggionato Fine Arts is pleased to announce their forthcoming exhibition of Sixties Sculptures by the Swiss Sculptor Jean Tinguely. In 1959 on a visit to London to stage his first “Happening”, at the ICA, Tinguely announced “Static, static, static! Be static!, Be static! Movement is static! Movement is static because it is the only immutable thing – the only certainty, the only unchangeable”. A year or so later in March 1960, at the MOMA Gardens, in New York, Tinguely presented Hommage à New York, the first self-destructive sculpture. Composed of eight bicycle wheels, a piano, tubes, engines, a go-cart, smoke and fireworks; the construction moved, smoked and belched for half an hour and finally exploded. This was the turning point for Tinguely; liberated from canvas it was an open door for movement, new forms and colours. From then on all sorts of new elements appeared in his work, from scrap iron to feathers. The exhibition concentrates on the works from the sixties. The decade which is often considered the most important and innovative period of his career. Movement and sound become an integral part of the work. Inspired by the anarchic spirit of Dada, his functioning, but pointless machines have a crazy and unpredictable life of their own, which can be both amusing and threatening. Faggionato Fine Arts presents five sculptures in the exhibition. Clarissa from the Eos Series, Monocouillon, Peut-être and 2 Untitled works from the Welded Sculpture series. Also, on show will be 12 drawings, from the 60s, amongst them a sketch of the Heureka from the Walter Bechter-Stiftung Collection, the sculpture now stands outside the Kasino Zürichornin Zürich. For visuals and further information, please contact Gérard Faggionato or Anna Pryer Opening Times Mon – Friday 10.00am – 6.00pm Saturdays 10.30am –1. 00pm Closed Saturday 19 December Closed 23 December 1998 Re-opens 4 January 1999